Originally from Kilkenny in the Republic of Ireland, Andy Broderick arrived in the UK in 1997 to study Fine Art at Teesside University and since graduating in 2000, has been working as an artist from his studio in Saltburn on the North Yorkshire coast, exhibiting widely throughout the country and internationally.

Andy’s art practice focuses very heavily on the discipline of drawing, and the use of natural materials and pigments such as earth, tea and pulped plants, to develop a spiritual bond and physical affinity with the natural environment and the creatures that inhabit it. The qualities of individual lines and marks are very important in Andy’s work and so rather than existing purely for the purpose of formal representation, he tries to use lines which express energy and life, or a certain texture, form or weight, or even just for its own sake – a thing of beauty.

Andy draws from living objects within nature – plants, animals and human figures, and is very interested in the feeling of animation and the sense of being alive that lines and marks can convey when portraying these subjects.

This current body of work, is influenced by the Arte Povera movement in Italy and by Japanese Zen painting, where Andy has been using animals as a point of focus on the natural world and surrounding environment. The principal focus of these drawings is on simplicity, purity, and honesty, and to create a sense of slowing down and connecting with the subject, like a sort of meditation. 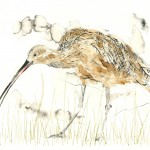 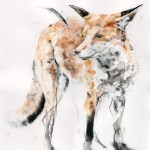 My Wife is a Vixen by Andy Broderick