Jim Wright lives at Kirbymoorside on the edge of the North York Moors and finds much of his inspiration in the wide open moor-land that surrounds his home. Light is an important element in his work and he is fascinated by the effects of light on these vast open spaces, particularly in the early morning and late evening. Unlike many artists he likes to paint into the light creating strong contrasts of light and shade.

His other great love is the sea which, as an enthusiastic surfer, he is able to observe at close quarters. His seascapes capture the raw exhilarating energy of the waves. To view them is to breathe sea air and taste salt on the tongue.

Jim was born in Scotland and spent his early childhood in Bannockburn near Stirling before his family moved to Perth in Western Australia where he discovered a lifelong passion for the surf. After completing his studies and gaining a diploma in art in Australia he worked in the commercial art field for many years before moving into Fine Art in 1998. Since then he has successfully established a reputation for his landscapes and seascapes of North Yorkshire. Many of his paintings are in private collections both here and abroad. His work has won a “Highly Commended” in the Laing Exhibition (a national seascape and landscape exhibition) and has been shown at the Mall Galleries, London. 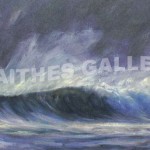 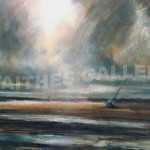