Margaret Shields was born and brought up in Middlesbrough. After attending Middlesbrough College of Art, she studied music at the Royal Academy of Music in London. She returned home to paint her familiar surroundings, mostly urban subjects, and in the evenings to teach piano.

In 1985 she moved to Saltburn and her work began to include sea subjects, particularly the many and varied ships, from North Sea Ferries to the intriguing vessels designed for the oil industry. In many of her paintings these are a backdrop against which she portrays the various activities of the seaside town: riding, beach-combing, sunbathing and battling the storms.

Frequent trips to Middlesbrough allow her to continue to paint urban subjects. She particularly enjoys the clash of old and new in modern city life and includes with relish the more prosaic elements of urban scenes.

In 1989 she won the Northern Arts Bursary for painting.

Her work has been shown in Florida and New York and in 1994 she took part in a touring exhibition of the United Arab Emirates of the Women’s Art Association. 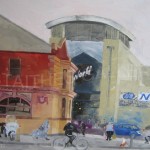 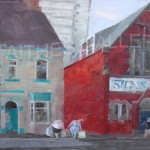 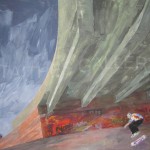 Skateboarding under the A66 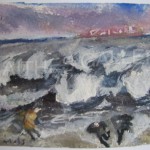 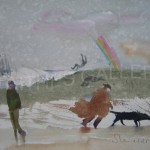 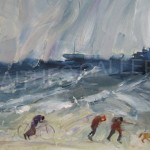 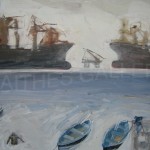 Two Ships and an Oil Platform 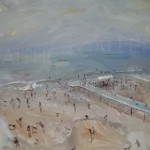