Mark has lived in the UK since leaving the United States, and a career in Graphic Design, in 1990.  “I became obsessed with British light,” he says, “and began painting, inspired by the great British watercolourists: Turner, Singer Sargent, Whistler and Sego.”

Mark settled in Derby but discovered the North East coast of England early on and started visiting Staithes and Whitby whenever he could to paint from life en plein air.  He enjoyed considerable success: his work was warmly received by several galleries, won awards at open exhibitions and was shown at the Mall Galleries in London.

“But I was looking for a new style,” he says.  “There were so many other artists working in traditional watercolours.  I wanted something that would stand out from the others.”  Fellow artist Leslie Goodwin encouraged him to use drawing pens and he began to rediscover his old drawing skills, finding they worked well when combined with his painting style.

“Whitby and Staithes have a wealth of lines to work from,” said Mark, “stairways, railings, drainpipes, lampposts, chimney pots.    The texture of Arches paper perfectly resembles the white rendering on the walls and the narrow streets allow interesting shadows to be cast on the white walls.  I try to mimic the simplicity by using spontaneous, continuous lines and a minimalist approach. The few colours I use can be seen all around on doors and windows – ultramarine and vermilion, which make a lovely shade for shadows when combined.  The ink gives the drawings a quirky look and I sometimes use exaggerated perspective to create a slightly comical feel within a realistic light and atmosphere.”

Mark is now trying to use the new style to effect in other subjects and locations. His latest idea is to create night scenes using tinted paper and gouache. 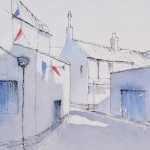 Sunlight on the Cod 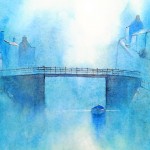 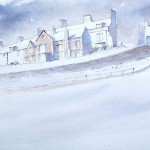 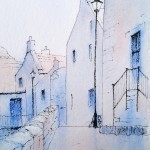 Top of the Harbour Wall 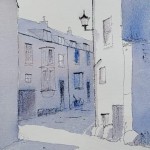 Looking up the High Street, Staithes 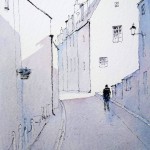 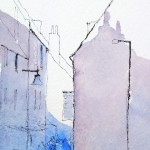 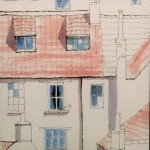 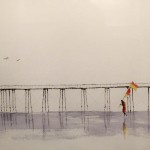 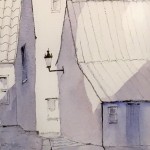 Down the Steps, Staithes 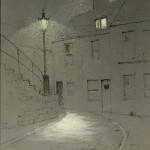 Below the Steps, Whitby 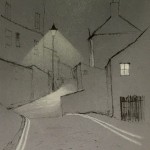 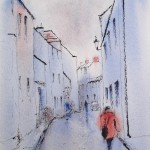 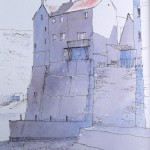 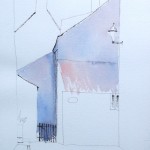 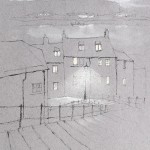 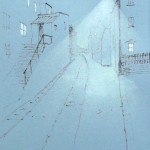 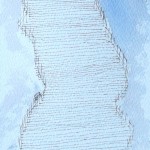 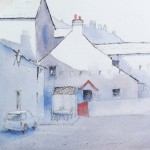 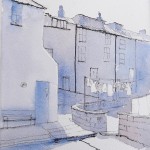 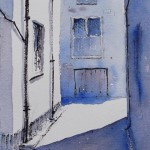 Light Down an Alleyway 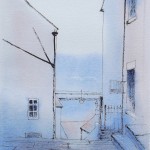 Evening View from the Top 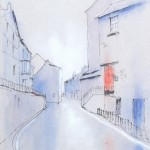 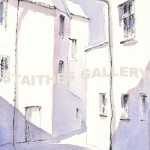 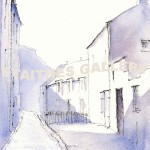 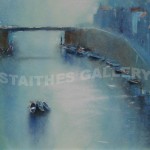 After the Rain, Staithes 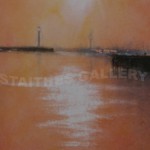