Phil was born in 1964 in the North West of England, where he spent most of his formative years. He attended art college in his youth but took up a career in social care which prevented him from pursuing art at the time and he now considers himself to be largely self-taught. He spent his working life actively involved in supporting vulnerable people with disabilities to gain independence, through public sector organisations. He recently retired from this career path to concentrate on his life-long passion for painting and creating.

He has recently moved his studio in Rivington, Lancashire, to a houseboat on the Rochdale Canal in Hebden Bridge, West Yorkshire and spends his time working from ‘Wheelhouse Studio’ and the surrounding countryside. The moorland and the sea remain his main sources of inspiration. Frequent walks through moorland and along the coast inspire him to try to develop a greater understanding of the changing seasons and to explore natures colours and rhythms.

His usual mediums are gouache, pencils and acrylics, but he has recently diversified and experimented to use a wider range of mediums including his own hand-made paper boards.

Phil’s monochrome series: Night Passage was inspired by the mesmerising movement of the sea when viewed from the stern of a night ferry lit by the lights from the boat.

His current works: The Seventh Wave and The Gathering introduce a small amount of colour, a deep and powerful sea-green seems to stir from the depths, rising to the surface to hover above the spindrift.

NIGHT PASSAGE
These are monochrome pieces, painted using acrylics and mixed mediums on board.

I have always spent as much time as I can at the coast and have a deep love of the sea. For me, it’s endless movement has a pacifying, melancholic and a healing quality.

In these paintings I was trying to capture some of these qualities and to get a sense of this movement.

I used different mediums in their development, but preferred acrylics for these pieces. I was never quite happy with the colours I was mixing and kept coming back to the monochrome format.

A few years ago, I took an overnight journey across the North Sea on my way to Copenhagen. I spent many hours watching the movement of the waves, lit only by the lights of the ship and fading long into the darkness. It was mesmerising.

The monochrome format reminded me and connected me again to that journey. With those memories and working from the many photos taken whilst walking the east coast, the pieces finally came forward in a way that made sense to me.

NIGHT PASSAGE is a personal remembrance of that night time journey across the North Sea.

So much of our relationship with the Sea concerns our own vulnerabilities, and the respect we have for its potential…

SEVENTH WAVE
With flailing limbs and pounding hearts, we measure ourselves for the SEVENTH WAVE.

THE GATHERING
As a storm builds in strength, so it draws the fears and hopes of those who will be tested in its path. And so begins THE GATHERING ….

DEEP GREEN TIDE
Bold waves take us to distant shores…and change is only ever inevitable.

IN THE WAKE OF …
Even during the calmest of seas, a sudden and unexpected plume or wave can occur. As if from nowhere, she has let her presence be known… 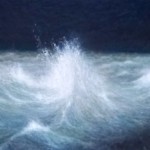 In the Wake of… 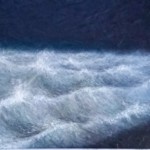 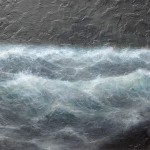 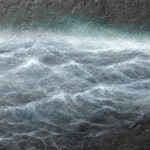 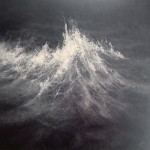 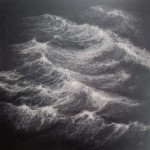